The midfoot is an important structure within the foot that assists in absorbing forces that come from activities like walking, running and jumping. When patients come see us here at Dallas Podiatry Works and need treatment for a midfoot injury, they often have one of the common Lisfranc injuries. In severe cases, these injuries can take several months to heal properly, but recognizing the problem and receiving early treatment can keep it from worsening.

Knowing a bit about basic foot structure can allow you to better understand Lisfranc injuries and what can be done for them. In this particular issue, our focus is on the Lisfranc joint complex, which is formed by the bones and ligaments that connect the midfoot to the forefoot.

The midfoot is responsible for stabilizing the foot arch, and it does this with the use of the tarsal bones. In the forefoot, we find the long, thin bones (metatarsals) that lead up to the toes. At the point where the metatarsal and tarsal bones meet, we find the Lisfranc ligament that connects them. This tough band of connective tissue provides strength for the joint and keeps the bones properly aligned. 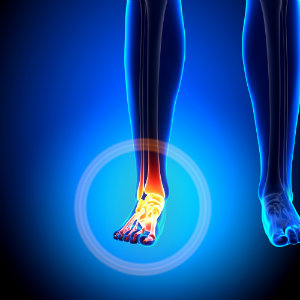 The most obvious signs of a Lisfranc injury are bruising (found either in the top or bottom of the foot), swelling in the top of the foot, and pain that progressively worsens with physical activity or even while standing.

Injuries in this area are sustained from either direct or indirect forces on an affected foot. Many times, an injury occurs in response to excessive twisting (especially in sports like soccer or football) or from a fall from height. In athletic participation, a midfoot injury will often happen when an athlete has his or her foot planted in a downward, flexed position and then stumble over the top of it. In the case of direct trauma, there can be multiple fractures and dislocations in the Lisfranc joint complex.

There are three different forms of Lisfranc injuries, and any might be sustained either independently or as a combination with another. These types of injuries are:

First aid steps for treating a Lisfranc injury includes the use of ice, elevation, and rest to both protect the injured areas from further damage and to reduce pain and swelling. Further options, depending on the nature of the injury, that we may prescribe include oral medication, immobilization, and physical therapy. Immobilization may entail a cast or crutches to keep bodyweight off the area.

Surgery may be a recommended part of treatment, depending on the severity and nature of the midfoot injury. Surgical procedures that might be used include fixation and fusion. When internal fixation is performed, bones are lined up in their proper places and then secured with the use of screws and/or plates. After about 3 to 5 months, the screws and/or plates will be removed to allow for increased movement.

Fusion is an option that is more commonly used for severe cases that are damaged beyond other means of repair. This procedure will fuse damage bones together, and the will heal into a single, solid piece. In the event that screws or plates are used for fusion, they will not likely be removed.

Whether we use conservative or surgical methods for your Lisfranc injury here at Dallas Podiatry Works, you can be assured that our goal is to provide optimal pain relief and restored functionality of your foot. Contact us by calling us at 972.853.7100 or schedule an appointment with either our Plano or Dallas, TX offices online today.