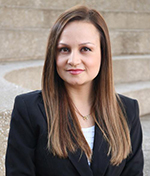 Irene Arroyo, DPM, FACFAS, was raised in Irving, Texas and received her Bachelors of Science degree from the University of Texas, Austin. This is where her interest in podiatry began.

Dr. Arroyo went on to earn her doctorate in podiatric medicine and surgery from Scholl College of Podiatric Medicine at Rosalind Franklin University of Medicine and Science in 2013. Her 3-year residency program in reconstructive foot and ankle surgery was completed at Advocate Illinois Masonic Medical Center/SCPM in Chicago, IL. During the final year of her residency, Dr. Arroyo served as co-chief resident there. It was about then Dr. Arroyo developed clinical interests in foot and ankle pathology, elective surgery, trauma, and limb salvage.

Dr. Arroyo is fluent in both English and Spanish.

Dr. Arroyo is married and has two adorable sons, Eduardo and Nicholas. She enjoys running, dancing, cooking, serving the community and loves spending time with her family and friends.

Dr. Arroyo is a Diplomat of the American Board of Foot & Ankle Surgery and is a certified foot surgeon. In addition, Dr. Arroyo is Chief of Podiatric Medicine at Merit Drive Dallas.